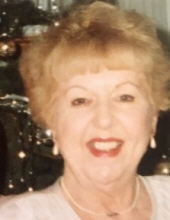 Winona “Nona” Lucille (McLaren) Hogh, age 92 of Novi, Michigan, passed peacefully on June 5, 2019, in the presence of her loving family. Born in Plymouth, Michigan, on August 14, 1926, Nona was the daughter of the late James W. McLaren and the late Gladys (Pepper) McLaren. Beloved wife of 60 years to her dear late husband Andreas Peter Hogh. Loving mother to Christian (Dawn) Hogh of California, and Ingrid (Troy) Fischer of Novi, and loving grandmother to Shawn, Brennan and Brad. Nona is survived by her sisters, Margaret (Lewis) Delameter, Nancy (Kelly) Roberts, and Glenda Wilkinson. She was preceded in death by her brothers, Douglas McLaren and Wayne McLaren.

In her youth, Nona, with her loving and close-knit family, lived and attended schools in multiple cities throughout Michigan to withstand the hardships of the Depression. Among her fondest childhood memories, Nona enjoyed tap dancing for family and employees at The Plymouth Grain Mill in Plymouth, MI, which her uncle, the late J.D. McLaren, owned, and performing in family “shows” at home. At the age of 12, she won second place ($5.00 and a pen & pencil set) in a kite flying contest at the Ionia County Fair (then the Michigan State Fair). In 1945, Nona graduated from Cooley High School in Detroit, MI where she enjoyed playing on the tennis team, being in the Glee, Pep and Voice clubs, and forming a life-long “sorority” of best girlfriends. After high school, she attended a Detroit secretarial college and was a secretary at Ford Motor Company for ten years while she helped her mother raise her three younger siblings due to her father’s sudden passing. Also during these years, Nona taught Sunday school, was the pianist at her church, traveled with friends throughout Michigan and to New York City, and traveled alone to California, the Bahamas, and Cuba. In 1952, Nona joined the Young Republican Club and performed secretarial duties for Vice President Richard Nixon’s campaign. As her love of travel and adventure grew, in 1956, she joined the United States Information Agency, which included passing a 3-month training program in Washington D.C. She accepted a 2-year secretarial position at the American Embassy in Bangkok, Thailand, and on her way to Thailand, she enjoyed site-seeing lay-overs in Hawaii, Tokyo (Japan), and Hong Kong (China). Bangkok provided many exciting and adventurous opportunities, as well as many military and royal (Thai) parties. In addition to befriending the Prince and Princess of Thailand, she also taught their children English and how to play the piano. She also befriended a silk manufacturer who designed beautiful silk dresses and party gowns for her, which were hand-sewn. During her assignment in Thailand, Nona also met a very handsome Dane, whom she married in Thailand (the Thai Princess was Nona’s maid of honor). While traveling alone on her return trip to Detroit, Nona enjoyed more site-seeing adventures in India (Rangoon and New Delhi), Pakistan (Karachi), Egypt (Cairo, where she rode a camel to watch the sun rise over the pyramids), Turkey (Istanbul), Greece (Athens), Italy (Rome and Milan), Switzerland (Geneva), France (Paris), Denmark (Copenhagen, where she and Peter reunited), and England (London). Upon their arrival in Detroit, where they were greeted by many anxiously awaiting family and friends, Nona and Peter settled in Livonia, MI, where they proudly and unselfishly raised their two children. Nona was a very loving and devoted mother and wife, with a great sense of humor. She continued her involvement in church, volunteered for many years as a Girl Scout leader, and Activities Director (in their northern MI vacation association), enjoyed being on golf and bowling leagues, traveled, played cards with family and friends, and drove fast! More than anything, Nona loved her family and being with them daily, celebrating Holidays, and spending annual, week-long vacations in northern Michigan together. She especially loved and cherished her grandchildren who brought her pure joy. Nona will leave behind a legacy of love, laughter, strong values and a love of God. Nona (Mom) will forever be deeply loved and her loving, sweet, kindness and generosity will be greatly missed by all whose lives were touched by her.

A funeral service in honor and celebration of Nona’s life will be held on Thursday, June 13, 2019, at Schrader-Howell Funeral Home, 280 South Main Street, Plymouth, MI 48170. Visitation will be held from 3:00–5:00 p.m., immediately followed by a funeral service. In lieu of flowers, memorial contributions are suggested to Make-A-Wish Foundation, 7600 Grand River Avenue, Suite 175, Brighton, MI 48114 (https://michigan.wish.org).

To order memorial trees or send flowers to the family in memory of Winona (McLaren) Hogh, please visit our flower store.