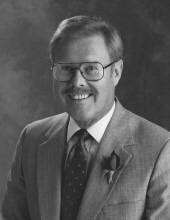 Bill was born in Charlevoix, MI, in 1936 to Edward Karl and Ada Lois (Yettaw) Golden. He attended St. Mary’s school where, in addition to the standard curriculum, the nuns taught him valuable life skills, including ping pong and shooting pool. After graduating from Charlevoix High School in 1954, Bill attended Ferris Institute, where he was a member of Sigma Alpha Delta fraternity (now Phi Kappa Alpha) and competed on the varsity track team.

After graduating in 1959, Bill embarked on a career in journalism and won several awards for his reporting and editing. While working at Albion Malleable Iron, he met his future wife, Suzy, when he was directed to give a tour of the plant to the new controller’s family. They married in 1961 and moved to Jackson when Bill took a job working for the Jackson Citizen Patriot. In 1969, he accepted a position with Florist Transworld Delivery’s publications department in Detroit, where he spent most of the rest of his career and made many friends.

Bill and Suzy raised four kids and several dogs together in Plymouth. After retirement, Bill and Suzy moved to The Villages, FL. An avid golfer, he was proud of his two holes-in-one. He was also a music lover and filled the house with the sounds of everything from ragtime piano to the Clancy Brothers. Although he lived in and visited many places throughout his life, Charlevoix was where his heart belonged, and he was glad to visit shortly before his passing.

Bill’s life will be celebrated on Friday, October 1, 4-8 p.m. and a Scripture Service at 7 p.m. at Schrader-Howell Funeral Home, 280 S. Main St., Plymouth, MI. An interment of ashes is planned at St. Mary’s Cemetery, Charlevoix, MI. Memorial donations may be made to the Charlevoix Historical Society, P.O. Box 525, Charlevoix, MI, 49720, or online at chxhistory.com.

To order memorial trees or send flowers to the family in memory of William P. Golden, please visit our flower store.