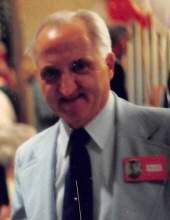 William was born in Detroit, Michigan on August 8, 1927 to his parents, Wilbur William and Mary Josephine (nee Oliver) Kenzie. He is survived by his daughter, Patti (David) Banka; proud grandfather of Kenzie (Alexander) Zaitzeff, Jeana (Andres) Escobar, Jennifer (Mike Shock) Banka, and Katie Banka. He is deeply loved and will be greatly missed by his brother, James (Gloria) Kenzie and sister, Madeline (Al) Koski. He is preceded in death by his siblings, Earl Kenzie, Geraldine Horger, and Ruby Kenzie.

William proudly served his country in the United States Army during World War II. He enjoyed bowling and golf, but mostly enjoyed spoiling his grandchildren.

Memorials may be made in lieu of flowers to Angela Hospice, 14100 Newburgh Road, Livonia, Michigan 48154.

To order memorial trees or send flowers to the family in memory of William Lorne Kenzie, please visit our flower store.