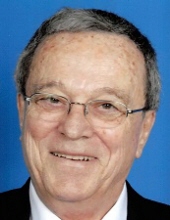 William Joseph Bogard, age 79, of Plymouth, Michigan, died peacefully with his wife and children at his side on May 28, 2018, following a courageous struggle with cancer.

Bill was born August 18, 1938 in Palestine, Illinois, the son of William Earl and Myrtle (Higgins) Bogard. He was a graduate of Palestine High School and received a Bachelor of Science degree from the University of Illinois at Urbana-Champaign. He continued his studies at the University of Illinois College of Medicine in Chicago and received a Doctor of Medicine degree in 1964. After a year internship at Saint Francis Hospital in Peoria, Illinois, he was conscripted into the US Army where he served as a Captain in the Medical Corps during the Vietnam War.
Following active military duty, he enrolled in a psychiatric residency program at a state hospital in Ypsilanti, Michigan. He later practiced medicine in Ann Arbor and at the Reichert Health Center at St. Joseph Mercy Hospital, Ann Arbor. He finished his career as the Inpatient Director of Psychiatry at Sarah Bush Lincoln Health Center in Mattoon, Illinois, not far from where he was born. He retired from medicine on April 1, 2006 and lived in Plymouth, Michigan until the time of his death.

Dr. Bogard was a member of numerous national, state, and local medical societies and a frequent psychiatric consultant. Earlier in his career, he was an instructor and clinical professor at the University of Michigan and Michigan State medical schools.

Bill was preceded in death by his parents and brother, Richard Earl Bogard. He is survived by his loving wife, Ginger, of Plymouth, Michigan, his daughter, Sheri Zoeller (John) of Arlington Heights, Illinois, and his two sons, Scott (Kelly Kempter) and Doug (Jan), of Ann Arbor, Michigan. He has eight grandchildren: Christian, Sarah, James, Hannah, Eric, Jahri, Rose and Erin. He is also survived by his sister-in-law, Susan Ankney, several nieces and nephews, and many caring friends.

Bill’s ashes will be interred at the family gravesite in Palestine, Illinois. A graveside memorial service will be held on Saturday, June 16, 2018 at 10:00 am at the Palestine Cemetery.

For those who wish to honor Bill further, donations may be made to Angela Hospice (Livonia, Michigan) or the Humane Society of Huron Valley (Ann Arbor, Michigan). Bill loved his dogs.
To order memorial trees or send flowers to the family in memory of William Joseph Bogard, M.D., please visit our flower store.