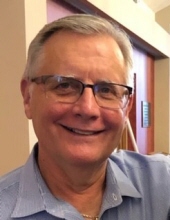 William Frank Lauter Jr., age 63, of Livonia, passed away on February 17, 2020. Bill was born on November 2, 1956 in Cleveland, Ohio to the late William and Mary Ann Lauter. He is the beloved husband of 41 years to Barbara Lauter (Mason). Bill is survived by his two children: David Lauter and Meredith (Adam) Roose. Loving Grandpa to Jackson Lauter, Brooklyn and Harper Roose. Cherished brother to Garry (Julie) Lauter.

Bill met Barb at Normandy High School in Ohio. Bill started his retail career as a stock boy at K-mart and worked his way up to becoming one of the youngest store managers in K-mart history. His job at K-mart took Bill and his family many places before finally settling in Livonia Michigan. Bill continued his career in retail, inspiring and mentoring countless co-workers and building lasting relationships with them long after their time together. He loved having his children and grandchildren over on the weekend, firing up the grill and soaking up sunshine and good music. He was an avid reader and had a passion for history and politics. All that knew him, found it poetic that he passed away on Presidents Day. In his retirement, he found joy in golfing and fishing with his son and grandson. He also began an angel fish breeding business to which he donated the proceeds to his grandchildren. Throughout his life Bill made sure his loved ones were always taken care of. This act of kindness was extended to many that he will never know, as his organs were donated to the Gift of Life of Michigan.

Family and friends may visit the Schrader-Howell Funeral Home, 280 S. Main St. Plymouth, MI 48170 on Sunday, February 23rd, from 2:00 PM to 6:00 PM.
The Memorial Service will be on Monday, February 24th, at 11:00 AM at the Ward Presbyterian Church, 4000 Six Mile Rd. Northville, MI. Family and friends may begin visiting the Church at 10:00 AM. A luncheon will take place in the fellowship hall following the Memorial Service.

A private interment will take place at a later date. In lieu of flowers, memorial contributions may be made to the American Heart Association.

To order memorial trees or send flowers to the family in memory of William F. Lauter Jr., please visit our flower store.