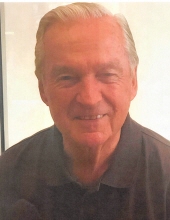 William Ellis Blackwell went to be with our Lord and Savior on Wednesday, January 5, 2022. William (Bill) was born in Detroit, Michigan on July 24, 1936. He was the son of the late Ben and Gladys Blackwell.

Bill is preceded in death by his wife Nancy Clare Blackwell and son Stephen Hoffman Blackwell.

Bill was raised in Detroit and Hazel Park, he graduated from Hazel Park High School, he later received a “full-ride” scholarship playing baseball at Western Michigan University as a left-handed curve ball thrower for the Broncos. Bill received his Bachelor of Arts Degree in Education at WMU. He met Nancy his wife of 60 years at WMU, Nancy was a sophomore and Bill was a strapping senior who was a pitching star on the baseball team.

Bill later received his Specialists Degree from Eastern Michigan University. Bill was offered a professional baseball contract by the Detroit Tigers but chose education over baseball as it was his passion.

Bill and Nancy married in August of 1958. Bill and his growing family soon settled in Southfield and later in Farmington Hills. Bill and Nancy retired in Northville, MI.

Bill’s career started as a history teacher at Oak Park High School. He later took a position as a Counselor at Covington Junior High School in Birmingham, MI.

Every school in which Bill was a Principal, was recognized as a National Exemplary School. Bill and his staff met with a number of US Presidents and their representatives as they were awarded National Exemplary Status in the White House Rose Garden.

Bill retired from Birmingham Schools in June of 2001. Bill spent his retirement years teaching Sunday School at Covenant Community Church in Redford Township, golfing, and spending time with his wife, children, and grandchildren.

There will be no public ceremony, only a private family remembrance for Bill in the near future.
To order memorial trees or send flowers to the family in memory of William Ellis Blackwell, please visit our flower store.