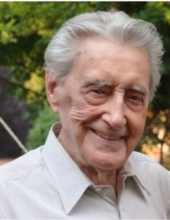 Bill was born on December 13, 1917, in Fredericton, New Brunswick, Canada, to Herbert and
Anna Stephenson. He was the youngest of 4 brothers and 1 sister. In 1924, Bill and his family
immigrated to the United States. Bill and his family moved, following available labor jobs, from
Maine to Virginia to South Carolina and settled in Florida. Bill lost his dear mother when he was13 years old.

In 1941, Bill was drafted into the Army and served fighting in World War II. He fought in the
South Pacific, going from island to island in combat until the Japanese surrendered. He fought
valiantly and bravely and was awarded the Purple Heart for his service. Upon returning to
civilian life, he worked in a number of different industries. He was an entrepreneur at heart and
worked in his own bakery, owned a ranch in Florida, was a restauranteur, worked for the postal service and a diverse number of other endeavors.

In 1968, Bill married the love of his life, Genevieve. They built a lovely life together in both
Plymouth and Florida. Bill owned a restaurant in Florida called “Little Hatties.” His family had
many good times at Little Hatties eating chicken and dumplings.

Bill and Genevieve loved being with children and grandchildren. They loved to travel with
friends and go on cruises. They had many fun adventures together. Genevieve passed away in 1997, and Bill missed her tremendously.

He spent the last 22 years “mildew-ing” around the house, swinging on his swing in the
backyard, changing all the lightbulbs in his house to 5 watts and doting on his grandchildren and great-grandchildren. “Pa,” as he was known to them, always had time for these very special people in his life. He could be seen often holding a baby, playing cards with the kids, making ice cream cones for them, giving them Dum-Dum suckers, playing on their playset and going to their activities. He was an important part of all the birthdays, parties and events.

Pa was known for his wisdom and advice. He always said that you cannot truly enjoy
something unless you share it with someone you love. He warned us of three things that could
bring us unhappiness: Self pity, waste and greed. Never be ashamed of your tears, he would
tell us. They show a great tenderness. Pa was a great listener and a great story-teller.

Bill lived very independently right up to the end of his long life. Throughout his recent health
challenge, he seemed more concerned with making everybody else feel at ease. He did not
struggle before passing away and this was such a blessing, as his family didn’t want him to
suffer in any way.

A small memorial will take place on December 27, 2019 at Noon at Schrader Howell Funeral
Home in Plymouth.
To order memorial trees or send flowers to the family in memory of W. T. "Bill" Stephenson, please visit our flower store.