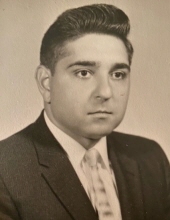 Vito Sambrone, age 92 of Plymouth passed away on January 14, 2022. Vito was born on January 5, 1930 in Plymouth, Michigan to the late Rosa (née Cuzzupi) and Frank Sambrone.

He is the beloved and devoted husband of the late Marvel Sambrone. They were married for 61 years. Marvel passed away in October 2013. He is the loving father of two children – Sindy Pollard and Steven Sambrone; proud grandfather of Bryan Pollard, Major Jason (Sarah) Pollard, Kyle Pollard, Emily (Bradley) Tester, Chloe Sambrone and Paige Sambrone; great-grandfather of John Pollard and Luke Pollard.

Vito proudly served his country in the United States Army as a Medic. He provided medical treatment and, if necessary, combat casualty care to injured soldiers. After his discharge from the Army, Vito enjoyed a successful career at the Daisy Manufacturing Company in Plymouth, Michigan – an American airgun manufacturer known particularly for their lines of BB guns. Later, he was employed by and retired from the Dearborn Moving Company.

Friends may visit the Schrader-Howell Funeral Home, 280 South Main Street, Plymouth, Michigan on Wednesday, January 19, 2022 from 5:00 P.M. until the time of the Funeral Service at 7:00 P.M.

For those who are unable to attend, the Funeral Service will be live streamed.


Vito will be laid to rest at Riverside Cemetery in Plymouth, Michigan.
To order memorial trees or send flowers to the family in memory of Vito Sambrone, please visit our flower store.