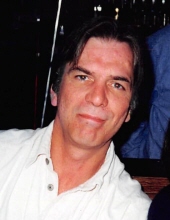 Timothy Currie Lycette of Plymouth and raised in Lathrup Village, died suddenly September 24, 2018. He was 62 years old. Tim was born in Oak Park, Illinois on January 26, 1956. Tim is survived by his three brothers Richard (Carol) Lycette, David (Laura) Lycette, and Jon Lycette, his nephews Donovan and Jeffrey, and his niece Nina. Tim was preceded in death by his brother Mark Lycette and his parents Richard and Frances.

Tim was an accomplished electrician for nearly 40 years. He was a great brother who had a great sense of humor. He was also an avid reader. Tim was a spontaneous, adventurous man who would drop everything and move to another state. He once ventured east in hurricane restoration and like South Carolina so much he ended up moving there for 8 years.

A Memorial Gathering will be Sunday, September 30, from 3-7pm at the Schrader-Howell Funeral Home, 280 S. Main St., Plymouth, 48170. There will be a short Funeral Service beginning at 6pm on Sunday evening.
To order memorial trees or send flowers to the family in memory of Timothy C. Lycette, please visit our flower store.