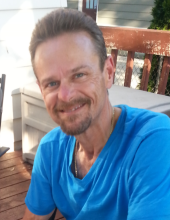 Timothy Alan Stamper, 56, of Plymouth, Michigan passed away on Saturday April 14, at 2:45am, after a very arduous battle with stage four pancreatic cancer. He found his peace under the astounding care of Angela Hospice in Livonia, Michigan.
Tim was born on May 31, 1961 in Ann Arbor. He was the second son of the late Carl Stamper and Alene Stamper.
A graduate of Plymouth Salem High School Class of 1979, Tim would continue on into the working class where he met Gina Sewell and fell in love. Their marriage would produce two boys, Jonathan and Joseph, named for his lifelong childhood friends. Sadly, Gina was taken on May 12, 1992.
Tim then turned to his music and friends to mend his broken heart. He was singer, a drummer, and knew how to work a crowd. He performed Rock and Roll at venues small and large for several years.
In 1994, Tim met Kellie Beveridge and they fell in love over laughter and wonderful new memories. They were married in November of that year and from their union Tim’s sons, Everett and Henry were born. His family became more significant than ever before.
In more recent years, Tim came to know other passions such as gardening with his father, woodworking, carpentry, metallurgy, and of course, his love for the thrill of riding his motorcycle: the “Goblin. “ He was also called back to music in the form of playing the ukulele, which he cherished.
Tim Stamper was a longtime employee of Plymouth Canton Community Schools. His friends and coworkers knew him best for his charisma and integrity with all the staff and students at Plymouth Canton Educational Park.
Tim is survived by his four sons, Jonathan (Jennifer) Stamper, Joseph Stamper, Everett Stamper and Henry Stamper; his mother, Alene Stamper; his brother Mark (Lee)Stamper; niece Jenna Stamper, nephew Marek Stamper; Kellie Beveridge; and all the friends that he had gathered along his way.
Tim is preceded in death by his first wife Gina Stamper, and his father Carl Stamper.
Tim Stamper was bold and he was edgy. He had an incredible wit that he used to bring great joy to many, to bring light to even our darkest moments. It is certain that that light has guided him to his next great adventure.
We ask that you join us in celebrating the life of Timothy Stamper by stopping by his memorial gathering, which will be held at the Schrader-Howell Funeral Home, 280 South Main St, Plymouth on Thursday, April 19, beginning at 1:00pm, with a celebration of life service at 7:00pm.

To order memorial trees or send flowers to the family in memory of Timothy A. Stamper, please visit our flower store.