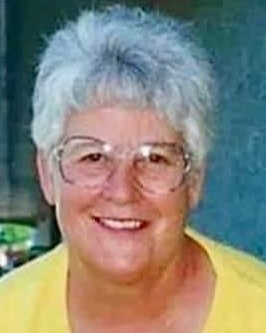 Sydnee Paul, age 81, passed away on October 4th with family by her side.  She was born on April 8th, 1941 in Rockford, MI to Kenneth & Jeanne Van Aken.  In 1959 she graduated from Plymouth High School and worked at Beyer Rexall Drugs.  She met her loving husband of 59 years, John Paul, at Riverside Roller Rink and married on September 7th, 1963.  A dedicated mother, Syd stayed home to raise her three daughters.  She then took on babysitting jobs for many families and cared for them as if they were her own.  Later she took a job at Kmart in Plymouth. She loved gardening and soon became known as the Kmart “Flower Lady”.

Syd was very active in Girl Scouts most of her life and when her daughters joined scouting she became their Troop Leader.  She was a member of the Beta Sigma Phi Sorority, Buxom Belles Club and a volunteer usher at the Fox Theater.  She was a great friend to all who knew her.

Syd was known for going all out for the holidays, even down to the clothing and jewelry she would wear.  She loved music, especially Elvis.  She collected dolls and really loved her Cabbage Patch babies. They were especially comforting and entertaining to her as her Alzheimer’s progressed.

Although she suffered from Alzheimer’s, she never lost her sense of humor.  She would constantly laugh, act goofy and enjoyed her art and music. The workers at the Assisted Living facility would call her their “Sydee Syd” and truly enjoyed her.

Her family meant the world to her.  Words are not enough to express the unconditional love that she had for her husband, daughters and all of her grandchildren.

Syd will be greatly missed by her husband, John; her children, Melinda (Chris) Phifer, Vicki (Eric) Ott and Heather Doyle; her grandchildren, Anthony (Stephanie), Nick, Taylor, Joseph, Nicole, Adam, Olivia, Alexa & Darren; her great-grandchildren, Carter & Luca; her sister, Meri-Lyn (Jim) Hill; and many nieces and nephews.  She is preceded in death by her parents, Kenneth and Jeanne, and her brother, Daniel.
A funeral service will take place at 11AM on October 17th at the Schrader-Howell Funeral Home with Pastor Bob Miller of the First United Methodist Church officiating.  A graveside committal service will follow at Riverside Cemetery in Plymouth.  Visitation will take place on October 16th from 2-8PM at the funeral home.  Memorials may be made to the Alzheimer's Association.
To order memorial trees or send flowers to the family in memory of Sydnee Ann Paul, please visit our flower store.