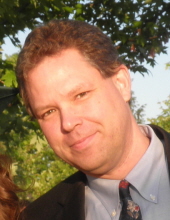 Steven Edward Walter of Plymouth, died suddenly on May 6, 2018. He was 50 years old. Steve was born on July 29, 1967, in Detroit, to John and Virginia (nee Gerhard) Walter. Steve was the beloved husband of Lauren (nee Powel) Walter for 25 years. He is also survived by his three cherished daughters Jennifer, Natalie, and Claire, his loving mother Virginia Walter, and his dear siblings John Walter, Juli (Ed Billings) Walter, and Kevin (Diana Lyon) Walter. Steve was preceded in death by his father John Walter.

Steve was a talented electrical engineer who was not only respected for his design skills but also his contributions in the areas of technical marketing and sales. His current work was with Indie Semiconductor, based in southern California.

Steve took refuge in simple pleasures: music (he was self-taught on the drums and guitar and performed locally); golden age Hollywood cinema; and, most of all, enjoying the company of his family and friends.

Visitation will be Sunday, May 13, from 2:00 until 8:00 p.m. with a Rosary Service at 7:00 p.m., at the Schrader-Howell Funeral Home, 280 S. Main, Plymouth, Michigan 48170. His Funeral Mass will be Monday, May 14, at 10:00 a.m. at Our Lady of Good Counsel Catholic Church, 47650 N. Territorial, Plymouth, Michigan 48170. In lieu of flowers, donations may be made to a memorial fund that his family has set up to support the education of Steve’s daughters. (Contributions can be made, and the fund can be found, on YouCaring.com.)
To order memorial trees or send flowers to the family in memory of Steven E. Walter, please visit our flower store.