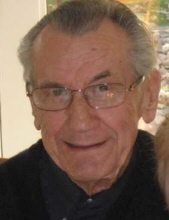 Stanley John Wisniewski of Southfield and formerly of Detroit, died September 29, 2018. He was 96 years old. Stanley was the beloved husband of the late Agnes Wisniewski who died days earlier on September 23, 2018. They were married for 67 years. Stanley is survived by his two loving children Aaron (Linda) Wisniewski and Brian (Margaret) Wisniewski, and his precious grandchildren Matthew (Emery), Pamela, Scott, Megan, and Nicholas. He was preceded in death by his wife Agnes, his daughter Gail, his four siblings Bernard, Joseph, Walter, and Valerie, and his parents Wladyslaw and Rozalia (nee Kuczfara) Wisniewski.

Stanley was a WWII veteran and received the Bronze Star for heroic effort and the Purple Star for being wounded in action. He was a tool and die maker having spent his entire career at Progressive Tool & Die Company.

Stanley enjoyed fast pitch softball in his earlier years, bowling and golfing. He loved traveling with his wife Agnes. They took numerous cruises in the Caribbean, Alaska and Hawaii, plus visited Israel, Greece, Italy and France. For many years they spent part of their winters in Florida. Stanley was truly loved by many and will be deeply missed.

A Memorial Mass for Stanley and Agnes will be Saturday, October 20, 2018 at 10am at Our Lady of Good Counsel Catholic Church, 47650 N. Territorial Road, Plymouth, 48170. Family and friends may begin visiting the Church at 9:30am. In lieu of flowers, memorial donations may be made to Angela Hospice.
To order memorial trees or send flowers to the family in memory of Stanley John Wisniewski, please visit our flower store.