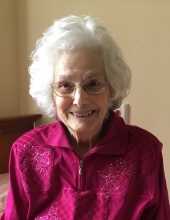 Passed away at Angela Hospice in Livonia on Friday, November 9, 2018 at the age of 93. Shirley was one of nine children of Jenner and Florence ( nee Brown ) Fay. Her father was involved in farming and she finished her high school education in western Wayne County. During the war years she worked at the Willow Run Bomber plant. In 1944 she married the love of her life, Clyde P. Younce Jr. and they shared 63 years of marriage together. The couple resided in Arizona and California until making their home in Canton, Michigan in 1966.

Shirley and her husband flew all over the United States in a surplus plane purchased form the government. They even flew in the winter, attaching skis to the plane and landing at Higgins Lake where his parents had a group of cottages. Shirley was extremely active in her church, St. Thomas a'Becket Catholic Church. She was involved with the fund raising for the church's construction along with many other areas. Another project she pursued was sending Care Packages to the Felician Sisters in Africa. Sewing her children's clothes and working in the garden were some of Shirley's other interests. Shirley also loved her ice cream.

Visitation will be held on Monday at St. Thomas a'Becket Catholic Church, 555 South Lilley Road, Canton from 10 am until the time of the funeral mass at 10:30 am. Shirley will be laid to rest beside her husband and son at Riverside Cemetery in Plymouth. Contributions are suggested in her name to Angela Hospice in Livonia.

To order memorial trees or send flowers to the family in memory of Shirley Ann Younce, please visit our flower store.