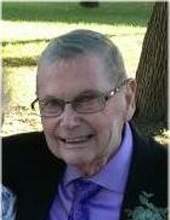 He was born June 14, 1930 in Dearborn to Edward S. Huckabone and Margaret S. Grant. Grant was a 1948 graduate of Fordson High School. While working for the County of Wayne, Grant joined the U. S. Marine Corps during the Korean Conflict. Afterward, he returned to the County until he retired in 1979. He enjoyed spending time with his family, going to horse races at the track, playing poker, a bit of travel, and telling “Bapa jokes” (“Bapa”, a name endowed to him from his first grandchild).

In 1961, Grant met, who would become his wife of 57 years, Rowena “Bunny” Bunch. Together they would raise four children whom they doted over to this day.

A private visitation was held at the Schrader-Howell Funeral Home, Plymouth.

A Veteran’s Memorial Service at Great Lakes National Cemetery in Holly, Michigan will be held on Wednesday, August 12, 2020 at 11:00 A.M.

Those who wish to honor Grant Huckabone’s memory are invited to consider a contribution to the American Heart Association, 27777 Franklin Road, Suite 1150, Southfield, Michigan 48034. Donations may also be made by phone at 1.800.242.8721 or online at www.heart.org
To order memorial trees or send flowers to the family in memory of S. Grant Huckabone, please visit our flower store.