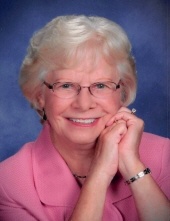 Rosemary Smith, 87, of Canton, Michigan, passed away in the company of her family members at her home on May 11, 2022. Rosemary was the middle child of five children born to Grace and Frank Nackerman. She grew up in the small community of year-round residents on Beaver Island in northern Lake Michigan. After high school, she enrolled as a student nurse at Mt. Carmel Hospital in Detroit. While there, she cared for a rookie policeman named Harold Smith who was injured while directing traffic. They ultimately married on January 15, 1955 and began their 63-year history.

Rosemary had five children over the next seven years, which included a period when three children were born in two years. She always prioritized family first, taking seriously the role of full-time homemaker, through the million small things she did from making hot breakfast each day, to sewing kids’ outfits and helping with homework. She was always a constant presence in the family, making whatever sacrifices were needed to ensure each child grew to adulthood feeling loved and supported.

Once child-raising was complete, Rosemary returned to school later in life to complete her nursing degree, and proudly resumed her earlier career as a hospital-based registered nurse. After Harold retired, Rosemary shared in his dream of touring the U.S. and Canada in their RV. She also fulfilled her own dream of a trip with Harold to visit many attractions in Europe. They always enjoyed attending family events, no matter the distance, especially grandchildren’s artistic and athletic performances, weddings, and graduations.

Rosemary is survived by her four children: Sharon Jean (Steven) Conkle, Shannon Grace Barnes, Shawn Renee (Peter) Worrel, and Harold Terrence (Lee Pizzimenti) Smith; and by her two sisters, Ellen (Richard) Verduyn and Colleen Krusky. She is preceded in death by her daughter Sandra Lynn, and her siblings Barbara Huston and Rodney (“Bud”) Nackerman. Rosemary was the proud grandmother of 13 grandchildren and kept adorable pictures on her refrigerator of more than a dozen great-grandchildren.

To order memorial trees or send flowers to the family in memory of Rosemary Smith, please visit our flower store.