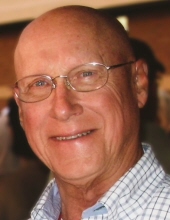 Ron is survived by his loving wife Florence Turner, his children Bruce (Laura) Turner and Janet (John McCuen) Lomasney, his grandchildren, Katherine Turner, Steven Turner, Maggie Lomasney, and Emma Lomasney.
Ron earned a business degree from Drake University in Des Moines, Iowa. After they graduated, Ron and Florence married on July 23rd, 1960, driving the next day to Ron’s new job site in Detroit, Michigan, where he immediately enlisted in the Army. He served stateside and in the reserves for 6 years.

Ron spent his career at Ford Motor Company as a financial analyst, or as he liked to say, “bean counter.” His work took him to many different divisions in Ford’s southeast Michigan operations. He retired in 1997 after 37 years of service.
Ron and Florence raised their children, Bruce and Janet, in Plymouth, Michigan. Ron was a very involved father and participated fully in his children’s activities, including Boy Scouts, Fife and Drum Corps, and tennis. The family took annual road trips to explore and experience many areas around the country. They attended the First United Methodist Church of Plymouth where Ron sang in the choir for nearly 40 years. He applied his finance skills by serving on the church Finance Committee and as church treasurer for 16 years. Ron also found his years of volunteering for the Salvation Army to be a very meaningful way of giving back to the community.

As a high schooler Ron was a very accomplished trumpet player, performing professionally with jazz bands in the Chicago area. He also had a wonderful baritone voice and sang for years in the Plymouth Community Chorus; the Christmas and Spring concerts were family favorite events. Ron loved listening to jazz, classical music, The Beatles, and Elvis. He had an extensive record collection that traveled with him when he moved from Plymouth to the Fox Run senior living community.
Ron was an avid fisherman, making annual trips to remote lakes in Canada with close friends. He took up golf in retirement, playing in Michigan during the summer and in Florida in the winter, where he and Florence lived in Naples and Bonita Springs. They also traveled extensively, taking trips to Australia, China, Africa and many locations in Europe.
Ron lived a full and generous life and will be deeply missed by family and friends.

Funeral Service Saturday March 5, 2022 at the First United Methodist Church of Plymouth, 11:00am, friends may visit at the church beginning at 10:00am until the time of service. A luncheon will be served in Ron's memory following the funeral in the church hall. All are welcome.

In lieu of flowers, donations may be made to First United Methodist Church of Plymouth, The Salvation Army, or the Parkinson’s Foundation.

To order memorial trees or send flowers to the family in memory of Ronald Steven Turner, please visit our flower store.