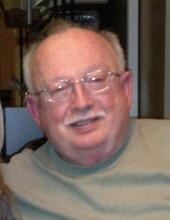 Ronald J. Koch of Plymouth, died April 24, 2018 at the age of 72. He was born on November 29, 1945 in Iron Mountain, Michigan to John and Roberta Koch. Ronald is survived by his beloved wife Christine O'Bryan whom he married in 1985. He is also survived by his loving daughter Shelly Koch and his two precious grandchildren Cameron and Ethan Koch. Ron was preceded in death by both of his parents, and his brother John Koch.

Cremation Services have been entrusted to the Schrader-Howell Funeral Home, 280 S. Main St., Plymouth, 48170. A Memorial Service will be scheduled at a later date.

To order memorial trees or send flowers to the family in memory of Ronald J. Koch, please visit our flower store.