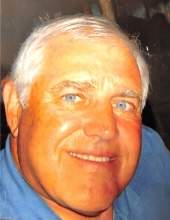 Roger Raymond Wines of Canton, died March 19, 2019 at the age of 76. He was born in Mount Clemens, Michigan to Raymond and Fern Wines. Roger is the beloved husband of the late Jeanette Wines of 44 years. Roger is survived by his loving children Eric (Crystal Lindsay) Wines, and Kristina (Paulette Toutant) Wines, his loving companion Irene Martin, his precious grandchildren Ashley and Rachel Wines, cherished step-grandchildren Alex and Elly Lindsay, his dear sister Kari Bricker, and his many cousins. Roger was preceded in death by his brother Bryan Wines, and both of his parents.

Roger graduated from Dearborn High in 1960. He attended Michigan Tech University on an academic scholarship, was a member of the Delta Sigma Phi fraternity and graduated from there in 1964. He spent his career working as an accountant. Roger enjoyed coaching and watching his kids and grandkids and their many activities, spending time with his friends, playing cards, golfing, bowling, going up North and traveling the world. He also spent a lot of his time volunteering for the St. John Neumann finance committee and playing on their softball team. Roger also received the Western Wayne County Volunteer of the Year for his work with Habitat for Humanity.

Visitation will be Friday, March 22, from 6-8pm at the Schrader-Howell Funeral Home, 280 S. Main St., Plymouth, 48170. His Funeral Service will be Saturday, March 23, at 11am at the funeral home. Family and friends may begin visiting the funeral home at 10am. In lieu of flowers, memorial donations may be made to Habitat for Humanity, 50430 School House Road, Room 204, Canton, MI 48187 or online at: www.habitatwwc.org

To order memorial trees or send flowers to the family in memory of Roger R. Wines, please visit our flower store.