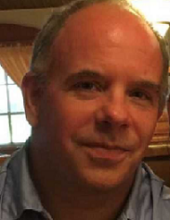 Robert Michael Gould, age 52 of Brighton passed away on April 19, 2020. He was born on September 19, 1967 in Detroit, Michigan. Robert was a brilliant husband, father, son, and brother. He completed his bachelors degree at Michigan State University, and his masters at Wayne State, both in electrical engineering. He married Jamie Gould in 1995 and had two beautiful children, Joelle in 1998 and Joseph in 2000. Rob took his love for cars and not only made it into a career, but also a hobby. He enjoyed working on cars in his free time, whether it was something simple as changing the oil in someone’s car or rebuilding an entire car. In fact, one of his most proud car projects was his 1968 mustang that he worked extremely hard on and personalized for himself. Rob also enjoyed fishing, and especially loved taking his son to Traverse City, Michigan every summer and salmon fish on the bay. Rob welcomed everyone who wanted to come along on the fishing trips with him and his son, and with every fish that was caught, happiness would overcome him. Aside from his likes, Rob possessed many brilliant qualities. He had the biggest heart and always put others before him. Rob was an easy going man and enjoyed the simplicity in life. It didn’t take a lot to make him happy. If it was just a simple conversation on the phone, or sitting by the fire with his loved ones on a camping trip, he would find something to cherish in every moment. He was intelligent, determined, and sharp, and he worked exceedingly hard for what he had. His family meant the absolute world to him. He took all of his unconditional love and showered it amongst everyone. He was the biggest supporter when it came to his children, and was a remarkable husband and father for his family. At the end of the day, Rob wanted what was best for everyone. Negativity wasn’t an option for him. He wanted everyone to be happy, treat others with kindness, and love one another.

He will never not be forgotten. He’s too incredible to forget.

Robert is survived by his beloved wife of 25 years, Jamie Gould, children Joelle Gould, and Joseph Gould, brother Matt Dzielsky, and his parents Walter Dzielsky and Gloria Gould Dzielsky. He is preceded in death by his brother Christopher John Gould.

A Memorial Service will be live-streamed on Wednesday, April 29th at 11:00 A.M.
from the Schrader-Howell Funeral Home. Please click the “Tribute Wall” link at the top of Robert’s obituary at 10:50 A.M. in which time the live-streaming will begin. The immediate family will gather privately prior to the service.

Memorial Donations may be made in Robert's memory to Mental Health America.
https://www.mhanational.org/donate-mental-health-america

Please be advised that in observance of the governmental order from the State of Michigan, we will be limiting funeral/visitation gatherings to 10 people at any one time. When in attendance, we kindly ask, for the safety and well-being of the families we serve and for your health, that everyone practice social distancing and consideration while in attendance.
To order memorial trees or send flowers to the family in memory of Robert Gould, please visit our flower store.