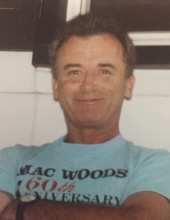 Rickey Wyatt, age 74 died November 7, 2018 of prostate cancer gone to the bone after a 20 year journey with the disease.

He was born in Wayne, Michigan in March 1944. He graduated from Wayne Memorial High School in 1963. He leaves behind his wife, Shirley (nee Vincent) of 53 years along with son, Rickey, Jr., daughters, Jamie (Paul) Beasley and Melanie Castrodale.

He was the wild and crazy grandpa of Nieko Castrodale, Savanah Millwood, Serene Wyatt and the late Branden Wyatt (age 25). Brother to Jane Wyatt, Sherry Rivetto, Sheila Markley and the late Zane (1986).

Rick served in the United States Army from 1964 to 1967. First with the 82nd Airborne Division and then with the 173rd in Vietnam. He then returned to his job at Ford Motor Company. He retired from the Sheldon Road Plant in 2006 after 41 years of employment. He was thankful every day for that job.

Rick loved to go fast and especially flew on his beloved 1986 Yamaha V-Max. He loved cars, bikes, old music and life in general. Nothing brought him more pleasure than teasing and aggravating people until they snapped. Then, his mission was accomplished and he would roar with laughter.

He was a kind and temperless man, and we will miss his fun, high-energy self. There will be no services.

He said, “I don’t want people staring at me dead.” He was hoping for a discount on his cremation if he brought his own gas. Big flash – big whoosh and gone! A sad quietness will settle over us all, but we will still have our happy memories. He always had us laughing or pulling out our hair. He said, “move on. Don’t sit around crying.” So, we’ll try.
To order memorial trees or send flowers to the family in memory of Rickey Lenyon Wyatt, please visit our flower store.