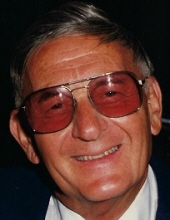 Richard Lee Holloway, of Plymouth, died March 21, 2018, at the age of 95. He was born to Earl and Eva Holloway, on November 2, 1922. Richard is survived by his loving children, Richard (Sally) Holloway Jr., James (Nancy) Holloway, and Douglas Holloway; his precious grandchildren, Nicholas, Andrew (Stephanie), Jon, Jacob, Jill, and Scott (Jennifer); and his cherished great grandchildren, Nolan, Brennan, Jack, and Eleanor. Richard is preceded in death by his beloved wife, Helen, and both of his parents.

Richard was born in Flint, Michigan, and was a three sport star at Flint Northern High School. He played basketball & baseball at MSU, before being called off to WWII. He mainly flew the iconic P-51 Mustang in the Army Air Corp, which escorted our bombers as well as ground attacks in Europe. One of his 60 missions was the bombing of the alleged hideout of Adolf Hitler. His last year was in Germany as a counter intelligence officer where he helped liberate Mathausen concentration camp. Married to his high school sweetheart, Helen, in 1944, their love and devotion was indivisible for the next 43 years. Professionally, Richard was a Buick car salesman & leasing manager. His effervescent smile, compassion, and humor were his trademarks. Pastimes included vacations in Bradenton, FL, golf, and being involved with his sons & grandsons' sports. He had a love of MSU and Detroit sports, minus the sad sack Lions. The countless hours of playing “catch” in the backyard will always be a cherished memory for his sons. He exemplified the term, “Greatest Generation.”

Visitation will be Friday, March 23, from 2-8pm at the Schrader-Howell Funeral Home, 280 S. Main St., Plymouth, 48170. His Funeral Service will be Saturday, March 24, at 11am at the Funeral Home. Family and friends may begin visiting at 10am. In lieu of flowers, memorial donations may be made to Great Lakes Caring Hospice, 900 Cooper St., Jackson, MI 49202.
To order memorial trees or send flowers to the family in memory of Richard Lee Holloway, please visit our flower store.