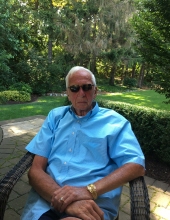 Richard Lee Foersterling, 86, passed away on June 13, 2019 after a brief illness.
He was born December 2, 1932 in Grosse Pointe Park to Gustave and Beatrice (seynek) Foersterling.

Richard lived most of his life in Plymouth and most recent in Northville.
He married Joan echelmeier in February 1954. Richard worked his entire career as a Vice President for national bank of Detroit, retiring 21 years ago. His position allowed him to travel all over the world.

He was a veteran of the US army during the Korean War.
Richard enjoyed time spent outdoors from drinking his morning coffee on the back patio, sitting in Kellogg park reading a book, golf and boating on lake st Clair with his family.
Richard is survived by his wife, Joan foersterling, daughter Kimberlee (Joseph) Koch, son Gregory foersterling (Janice) and youngest daughter Kendall (Robert) Cusmano.
Grandchildren Zachary Koch, Hayden and Natalie Cusmano.