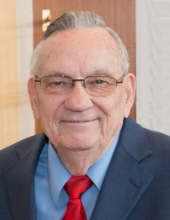 Richard Joseph Dreslinski passed away at age 83 on July 12, 2022 at Angela Hospice in Livonia, MI.

Richard was born in 1939 and raised on the Eastside of Detroit. In his early years, he had fond memories of watching the war planes fly overhead which may have sparked his lifelong interest in WWII history. He loved playing baseball with the boys from the neighborhood and spending time on Boblo Island where his love of the Detroit river and boats may have begun. He was a devoted Catholic his whole life, attending Our Lady of Queen of Heaven grade school and graduating from Salesian Catholic High School in 1957. He married Maureen Roseanne Kelly in 1971 and built a home in Canton, MI in 1973. Together they raised 3 children Rosanne, Richard, and Gregory in their faith.

After Richard retired from a management position from Northville State Hospital in 2001, he dedicated his life to his family, his church, and the Knights of Columbus Dooley Council No. 5492. During his time with the Knights, he held the office of Grand Knight and Deputy Grand Knight. He coordinated the annual 50/50 raffle for years at the summer picnics at St. Colette Catholic Church and loved making someone's day with their prize money!

In his community service roles, he actively worked to raise funds to aid those with physical disabilities, disaster relief, health initiatives, support refugees, and fund Catholic Education. He was very generous, sharing his time and resources with anyone in need.

During his downtime, he was an avid bowler and golfer and once even managed the rare feat of hitting a hole in one! He could often be found in Wyandotte or near the river watching for freighters or other large boats. He went on the Diamond Jack river cruise at least a few times every summer until Covid and his declining health prevented him from doing so. He also loved watching sports, especially Baseball, Hockey, and Football. Sometimes he cheered on the Detroit teams but usually he just heckled them from his couch. He loved history and read many non-fiction books, especially about WWII. His favorite TV channel was Turner Classic Movies and he spent many hours watching the old classics. His favorites were the old "Who-dun-its," where he loved solving the case before the hero did. He had a standing date with his close friend Butch to meet up a couple times a month to meet for coffee and scratch-off lottery tickets, never winning big but having fun nonetheless.

While flowers are always welcome, the family would also kindly suggest donations to Angela Hospice in Livonia which offered such a peace of mind to the family recently and ten years ago while Maureen was so ill. Contribution envelopes will be available at the Funeral Home.

Following the Funeral Mass, Richard will be laid to rest at Holy Sepulchre Cemetery in Southfield, Michigan.

To order memorial trees or send flowers to the family in memory of Richard Joseph Dreslinski, please visit our flower store.