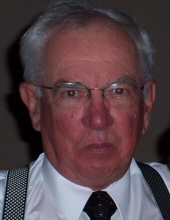 Richard (Dick) John Nelson, 85, of Plymouth, Michigan, passed away peacefully on February 9th, 2018 in Sun Lakes, AZ, with his wife Patsy at his side. He was born in Kenosha, Wisconsin in 1932, moved to Plymouth during adolescence, and remained since. He graduated from Plymouth High School in 1952.
He was preceded in death by his parents, Charles and Helen Nelson, and stepmother Alfreda Nelson.
His life was filled with faith, love of family, and sports. He was a devoted husband, caring father, and loving grandfather and great-grandfather. He loved playing golf (four hole-in-ones!) and cheering for any Michigan sport team (unless it was against Wisconsin). His grandchildren will remember him for sharing his enthusiasm for the Detroit Tigers!
He worked for the City of Plymouth and at the Penn and P&A Theaters in Plymouth before beginning his career at American Motors Company in Detroit. After retiring, he and Patsy enjoyed traveling and being snowbirds in Arizona. He always had a story to share, never met a stranger, and enjoyed his weekly card game with Patsy, his sister Barb, and her husband Ron.

To order memorial trees or send flowers to the family in memory of Richard J. Nelson, please visit our flower store.