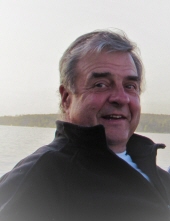 Cherished Husband, Father, Son, Brother and Friend, Richard passed away at his home with his family beside him on Thursday, May 3rd at the age of 65.

Rick was born in the former Plymouth Hospital on May 12, 1952 to Elizabeth A. (nee Spanier) Nulty and (the late) Gordon E. Nulty. His parents and little brother lived in the city of Plymouth until he was 5 years old, when they built a house 5 miles west, way out in Plymouth farm country, next to a creek and surrounded by corn fields. He attended kindergarten in a one-room schoolhouse and romped through fields, mud and wildlife not known in the city. His friends (who are still his friends today!) considered it a marvelous adventure to come out to play at Rick’s house. When his father died when Rick was 12, Gordie had already taught him everything mechanical, and Rick became the conservator of their country house for his mom Betty and his 3 siblings for the rest of his life.

Rick attended Our Lady of Good Counsel School and later Plymouth High School, graduating in 1970. Rick began investing in real estate and became a landlord at age 19, with his first purchase of three historic homes in downtown Plymouth. Over the next several years he leveraged the Plymouth properties and worked as a driver for Stroh’s, saving enough to invest in rentals in Plymouth, Northville, Westland and South Lyon. In those early years, he did all of his negotiations over the telephone, since few real estate professionals were comfortable transacting with a “teenager” in person. Rick’s successful real estate investments became his livelihood.

Rick will be remembered as the guy who could fix anything, and would help anyone who needed a hand. Rick achieved an Associates’ Degree and became a licensed heating and cooling contractor, as well as a licensed builder. In addition to building his own home on 10 acres in South Lyon, he built several houses in Plymouth as investments. He was an accomplished backyard tinkerer, collecting non-running cars, trucks, and miscellaneous equipment, to his wife’s dismay, continually working to restore them to operating. He questioned why anyone would scrap a vehicle when all you had to do was rebuild the engine, restore the body and replace the interior, and you already had the replacement parts in your backyard!

Rick has an arsenal of lifelong friends because he was the best friend to all. He was the person you called if you needed help, and he was always there for you no matter the circumstances. Rick excelled in sports and loved hunting. Rick’s hunting buddies are friends forever. He water skied and snow skied. He said his favorite place on earth was the pontoon boat on Walloon Lake, reading, gazing, or napping!

Rick was spiritually committed to the Catholic Church and held a special devotion for Saint Peregrine, the patron of cancer patients. In addition to Sunday mass, he particularly enjoyed the events of the Christian men’s groups, where he could experience his faith with people of similar values.

Rick met Susan Smith in 2003, who became the love of his life and married in 2011. Susan and Rick had an exceptional appreciation for one another. Their love is mirrored in their children and grandchildren, who Rick and Susan taught to value family above all else. They took great care of one another, in life and death.

Rick is survived by his wife Susan, his mother Betty, sons Jacob (Jennifer Cunnings) and Michael, and step-sons Stephen (Lauren) Gradinscak and Daniel Gradinscak. Rick’s special joys in his life were his grandchildren, Anthony, Alex, Elizabeth, Lucas, Izabella and Natasha. The love of his mother, Betty, will live forever. Rick’s siblings Greg (Talia), Maureen (Harry Cendrowski) and John (Sherry), along with many nieces and nephews will miss him forever.

Visitation will be held on Sunday, May 6th from 2pm until 8pm at the Schrader-Howell Funeral Home, 280 South Main Street, Plymouth. A rosary service will be held at 7pm.
Visitation will continue on Monday at 10am at Our Lady of Good Counsel Catholic Church, 47650 North Territorial Rd., Plymouth, followed by the Funeral Mass at 10:30am. Rick will be laid to rest at Holy Sepulchre Cemetery in Southfield.

In lieu of flowers, Rick would have appreciated donations to Solanus Casey Center Capuchin Memorial in Detroit: http://www.solanuscenter.org/ .


To order memorial trees or send flowers to the family in memory of Richard G. Nulty, please visit our flower store.