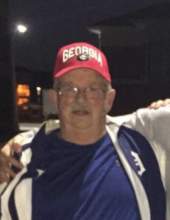 Richard R. Melow of Livonia, died January 6, 2020. He was 82 years old. Dick was born in Plymouth to Raymond and Winifred (nee Duffy) Melow. Dick was the beloved husband of Joan Melow who died in 2009. Dick is survived by his three loving children Bonnie (James) Melow-Giachino, Chris (William) Mays, Steven Melow, his precious grandchildren Ashleigh (Fiance David), Tyler, and Kash and best friend his dog Si. Dick was preceded in death by his wife and both of his parents.

Dick proudly served his country in the United States Army. He was an avid model airplane and boat maker. He also had a large sports memorabilia collection and was a talented wood carver. Dick was a world placing trap shooter, and a successful fisherman. He worked for the City of Plymouth for many years and did much of the landscaping throughout the city, including Schrader-Howell.

The services for Dick will be private for his family. In lieu of flowers, memorial donations may be made to the Michigan Humane Society in his memory.
To order memorial trees or send flowers to the family in memory of Richard "Dick" Melow, please visit our flower store.