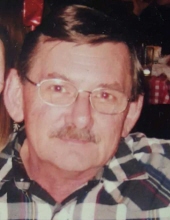 Richard Barnes of Dearborn Heights, died January 17, 2018 at the age of 68. He was born in Wyandotte, MI on August 2, 1949 to Kenneth and Martha (nee Jaroszewski) Barnes. Richard is survived by his loving children Allison Barnes, Colleen Barnes, Lisa Gonzales, and James Gonzales, and his precious grandson Landon, and his ex wife Margee. He was preceded in death by both of his parents and his siblings.

Richard graduated high school and went on to serve our country in the United States Army. He worked for Mr. Mat Rental as a truck driver for 30 years. When Richard wasn’t working he enjoyed doing puzzles, being outside gardening, and was a great cook.

Richard will be interred at New Maplewood Cemetery, in North Baltimore, Ohio on Wednesday, January 24, at 10:30am.
To order memorial trees or send flowers to the family in memory of Richard Barnes, please visit our flower store.