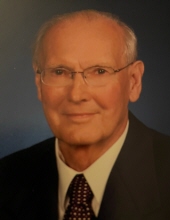 Paul Edward Bieritz, age 90 of Novi, Michigan passed away on February 20, 2021. He was born on October 8, 1930 in Champaign, Illinois to his parents Paul Edward and Edna (née Matzler). He is the beloved and devoted husband of Bette (née Reinhart) Bieritz; loving father of three children – Michael (Lisa) Bieritz, Susan (Tim) Kerrigan and Bruce (Yana) Beiritz.

Paul is a graduate of the University of Illinois at Champaign, Illinois. Later, he proudly served his country in the United States Air Force. After a successful 37-year career at General Motors, he and Bette retired to Fox Run Village of Novi. Paul and Bette were founding members of St. Kenneth Catholic Church in Plymouth. One of their children was baptized at the very first baptismal ceremony in the new St. Kenneth Church. Paul and Bette have remained active members over the many years as parishioners and Paul has served during weekday and weekend Masses as a Lector.

Due to the current COVID-19 restrictions, all services will be held privately for the immediate family.

Those who wish to honor the memory of Paul Edward Bieritz are invited to consider a contribution to Alzheimer’s Association, 225 North Michigan Avenue, Fl. 17, Chicago, Illinois 60601.

For those who cannot attend and wish to view the Funeral Service in a safe environment, the funeral will be live streamed.

To order memorial trees or send flowers to the family in memory of Paul Edward Bieritz, please visit our flower store.