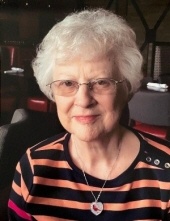 Patsy Ann Nelson, 86, of Plymouth MI, passed away peacefully on June 6th, 2021 while residing in Sun Lakes, AZ with her daughter, Jackie.

Graced with a warm smile and demeanor, she was a very loving and compassionate wife, mother, grandmother, and great grandmother.

Born to George and Florence Fadellin in Southfield MI, Patsy was the youngest of three children. She graduated from Berkley High School in 1953.

Patsy met the love of her life, Richard, in Plymouth. They were married in 1955 and enjoyed a storybook romance for nearly 63 years. They had four daughters: Linda Harbaugh, Cheryl Maxwell (Ron), Jackie Capriotti (Chet dec’d), and Rachelle Skehan (Michael). She was an amazing grandmother to her four grandchildren: Laura Maxwell (Joey Simpson), Ryan Maxwell (Aubrey), Christine Caddick (Ryan), and Stacey Cannon (Alex) and enjoyed the energy of five great grandchildren.

Patsy and Richard raised their family in Plymouth MI and after retiring they enjoyed spending winters in AZ.

Her family was her passion and she loved to sew clothes for her children, cross stitch pictures for her home, and family vacations were always an adventure! She worked in Detroit as a telephone operator for Michigan Bell Telephone Company, delivered the Plymouth Observer newspaper to the carriers’ homes with the aid of four young helpers, but will be remembered as “Personnel Patsy” from her career at JL Hudson’s.

Patsy was preceded in death by her husband, parents, siblings Jim Fadellin (Joan) and Shirley Shinn (John). In addition to her daughters, grandchildren, and great-grandchildren, she is survived by her sister-in-law Barbara Doyle Krump (Ron) and a host of nephews and nieces.

She was a member of Our Lady of Good Counsel Catholic Church.

Arrangements are being made through Schrader-Howell Funeral Home, 280 South Main Street, Plymouth. A visitation will be held on August 5th from 4:00 P.M. to 7:00 P.M. with a Rosary Service beginning at 7:00 PM at Schrader-Howell. A Funeral Mass will be celebrated at Our Lady of Good Counsel Catholic Church, 47650 North Territorial Road, Plymouth on August 6th beginning at 9:30 am. The Funeral Mass will be livestreamed for those unable to attend in person.

Memorial contributions can be made to Hospice of the Valley, 1510 East Flower Street, Phoenix, AZ 85014.

To order memorial trees or send flowers to the family in memory of Patsy Ann Nelson, please visit our flower store.