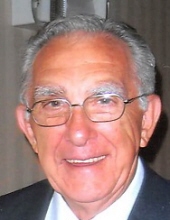 “Just about perfect; how are you?”

Pat enlisted in the U.S. Army at age 18 in May 1949. He served in Korea until September 1951. He was a pole lineman. Pat recalled that he learned to descend a pole very quickly.

Pat retired from General Motors where he worked as a tool and die maker. In retirement, he enjoyed traveling and woodworking and making furniture.

His last full sentence was one heard hundreds of times. When asked, “how are you?” Pat replied, in strained speech, “Just about perfect; how are you?”.

A Funeral Service will be held at the Funeral Home on Saturday, November 23rd at 11:00 A.M. Father Tom Belczak, from St. Kenneth Catholic Church, will preside. Lunch will immediately follow.

The family extends its gratitude to caregivers at Anthology Senior Living - Northville and Arbor Hospice.

Memorial contributions may be made in memory of Patrick Nelson Herriman to the Plymouth Community Council on Aging, 9955 North Haggerty Road, Plymouth, Michigan 48170.

To order memorial trees or send flowers to the family in memory of Patrick Nelson Herriman, please visit our flower store.