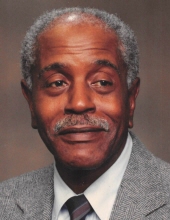 He is the brother-in-law of Deborah (Robert) Davenport, Michael M. (Elizabeth) Spitz, Matthew J. Spitz, Dorothy J. (Brian) Spitz-Wolcott and David C. Spitz. He is deeply loved and will be greatly missed by his many grandchildren, nieces and nephews.

Private family services will be held. Oliver will be laid to rest at Riverside Cemetery.

To order memorial trees or send flowers to the family in memory of Oliver Jefferson McClure, Jr., please visit our flower store.