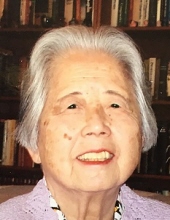 Nien-Si Liu Chu, age 87, born on March 28, 1931 in Shanghai, China, passed away on June 22, 2018, following a long battle with Alzheimer’s. She is survived by her husband, Ernest Chu, her three children, Clara Chu Celebuski and her husband, Joe, David Chu, and his wife Jo Ann, Wellington Chu and his wife Wakami, two sisters, Nien-Ling Leung and Nien-Lung Tai, a brother, Nianjing Liu, three grandchildren, Rebecca Celebuski and her husband Chang Ho Yoon, Michael Chu and his wife, Meghan, and Jeffrey Chu. She also is survived by several nieces and nephews.

Nien-Si attended Pomona College but graduated from the University of California, Berkeley in 1952 with a Bachelor of Arts in Social Work. She also met her husband Ernest while attending Berkeley.

Nien-Si was a devoted family member, loving her parents, her husband, her children, her siblings, her grandchildren, and her nieces and nephews. She also was a great friend and a loving resident to the staff at Huron Woods, a memory care facility in Ypsilanti, Michigan, where she lived for the last 7 1/2 years of her life.

Nien-Si relished her many roles. She was the eldest daughter of four girls and was a dutiful daughter and loving sister. She faithfully called her mother every day and her mother even followed her to Oak Ridge, Tennessee and Ann Arbor, Michigan, living in a nearby apartment to be close to Nien-Si. She brought her family regularly from her home in Tennessee and Michigan to Boston to see her mother, sisters, and her nieces and nephews.

Nien-Si was a devoted wife of almost 64 years, the true love and light of her husband's Ernest life. She followed him on his many trips around the world to Asia and Europe and enjoyed being on his sabbaticals in Stockholm, Sweden, Hong Kong, Oxford, England, and Mountain View, California.

Nien-Si loved playing tennis as well as watching the professional grand slam tennis events, especially Wimbledon and the US Open. She got both her sons into tennis, lifetime sports for both of them. She enjoyed playing bridge with friends and delighted when she could play bridge with family. She loved listening to classical music and, also played piano well, filling her home with sonatas and concertos from well-known classical composers. Her love of classical music inspired her children to love classical music as well. They all played musical instruments during their youth and two of her children continue to play well beyond college. Nien-Si loved cooking Chinese food, hosting friends regularly, serving her favorite cuisine.

Nien-Si was a happy woman her whole life and brightened people she loved and met with her kind, warm, and big smile. She will be deeply missed by all who knew and loved her.

A Celebration of Life service is planned for Sunday, August 5th at Huron Woods, 5361 McAuley Drive, Ypsilanti, MI 48197
To order memorial trees or send flowers to the family in memory of Nien-Si Liu Chu, please visit our flower store.