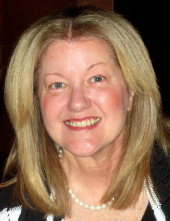 Nancy Holloway, 70, of Northville, MI was welcomed into the kingdom of Heaven on April 3, 2021, after passing peacefully at home, surrounded by her loving family. As she would often state, “I’m in God’s hands.”

How do you cram 70 years of loving, eternal optimism, and faith into a creepy 3” black & white newspaper obituary? You can’t. And Nancy was anything but black & white.

She grew up in Dearborn, Michigan in a classic 50’s family with loving parents who were part of the Greatest Generation. With her older brother, Eddie, whom she idealizes, she was as comfortable playing sports with the guys as she was playing with dolls. By the young age of 10, she already knew she wanted to be a nurse, own a horse, and raise a family. She far exceeded those dreams!

Nancy met Jim sophomore year at MSU and depending on who you ask, you will get various versions of that first encounter. Her perpetual smile, sense of humor, and servant heart sealed the deal for Jim. Forty-eight years of marriage proved it was meant to happen. Their 25th anniversary was celebrated by renewing wedding vows in the shadow of the Sydney Opera House in Australia. The last few months, they both acknowledged their love for each other had never been stronger.

After graduating from Michigan State University School of Nursing in 1972, she was among the country’s first nurse practitioners in the 70’s and became trained as a specialist at the VA in hypertension, at a time when few people knew the meaning of the word hypertension. Nancy was beloved by thousands of veterans she cared for through over 30 years of service at the VA Hospitals in both Allen Park and Detroit. Later she became a diabetic educator, much of it volunteering.

She professed to be the athlete in the family and always used as proof her MSU all-intramural softball championship jacket. In high school, her cheerleading team won the state championship. Nancy was an accomplished travel tennis player for decades which was offset by playing golf with the coordination of a new-born giraffe. Tailgates and attending basketball & football games at MSU were a source of great fun and occasional sobriety. The culmination was reveling in Southern California with many dear friends at their Rose Bowl victory in 2014.

But her major love outside of family were her horses. Nancy and a dear friend did storybook horse-riding vacations. In Ireland, they were transported back in time riding through the rugged, lush countryside to end the day tying their horses next to a pub to enjoy a sandwich & pint. They galloped on the mist-shrouded Pacific Ocean beach in secluded northern California and trekked through Tuscany region in Italy before spending the night in a medieval castle. Their last ride in 2016 in the Southwest, culminated with a spectacular picture of Nancy on her horse on the edge of the Grand Canyon, peering 3,000 feet below as rock walls revealed Earth’s own lifespan. The barn and her horse provided a sanctuary that only Tibetan monks would understand.

She So loved: Hilton Head Island wedding of Scott & Jen, antiques, Weather Channel, rum & coke, snuggling with her cats, her dear tennis/golf cronies, making perogies, Nolan’s 3-pointers, being a part of Special Olympics, grandson’s report cards, her racy Nissan 300Z in the 80’s, Blue Light in a glass, Karmanos Hospital Super Heroes, Brennan’s baseball blasts, MSU friends that became like family, coming to the rescue of wounded or stray animals who must have felt like they won the Powerball, and her condo up north which was a tranquil slice of heaven combined with aging rock star-like parties.

Being a mother and raising a family was undoubtedly her greatest source of happiness and accomplishment. Compassion was embedded in her DNA which served her immensely as a nurse, wife, and mother. She was the family’s spiritual leader who fostered love and empathy with the perfect blend of discipline. Proudest part for her was seeing the evolution of her children and grandsons. Witnessing her daughter Jill become an ICU registered nurse against insurmountable odds, and son Scott and his wife Jennifer, raising two beautiful souls, Nolan, and Brennan. You filled her life with wonderment and endless joy and even though she is gone, she will never stop loving you. In her final months, life came full circle as Jill and Scott bestowed on her the love and care they had unconditionally received from Nancy.

Never during her battle with cancer did she utter the words, “Why me?” You could take away her hair, her energy, and her eyesight, but you could never take away her hope. She looked fear in the eye and fear blinked first. Her mantra for many years was, “I’ve lived a great life.”

Nancy, you may not have realized it, but your fearless battle against life’s greatest challenge has taught us how to live, now, and in the future! We will summon your courage, insurmountable faith, and indomitable spirit, and treat every day as a gift. Yet another life lesson that she lovingly passed down to her family.

In her memory, please honor Nancy in any way which reflects her life: whether through a charitable donation, an act of kindness or volunteering, or reliving a funny story over your favorite beverage.

Friends may visit the Schrader-Howell Funeral Home, 280 South Main Street, Plymouth on Wednesday, April 7th from 2:00pm-9:00pm with a Rosary Service at 7:00pm followed by eulogy and music from family.


A Funeral mass will be held on Thursday, April 8th at 11:00am Our Lady of Victory Catholic Church 133 Orchard Dr., Northville.

For those who cannot attend and wish to view the Funeral Service in a safe environment, the Rosary and eulogy time at the funeral home as well as the Funeral Mass at church will be will be live streamed.

To order memorial trees or send flowers to the family in memory of Nancy Ann Holloway, please visit our flower store.