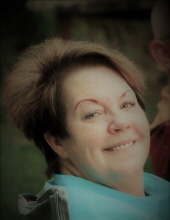 Myra was born on September 19, 1962 in Vicenza, Italy to her parents, the late Robert H. and Crystaline (neé Jordan) Rhodes. She is the beloved and devoted wife of Reverend Jeffrey R. Noble; loving mother of Taylor (Nate) Boucher, Brittany (Cody) Roberts and Brooke Noble (Kristjan Becka) and proud grandmother of Lukas Monroe, Remington Roberts and Autumn Roberts. Myra is deeply loved and will be greatly missed by her brothers, Alan (Tamara) Rhodes and Hal (Beverly) Rhodes. She is also survived by many nieces and nephews.

Myra and Jeff were married for 34 years. They moved from Georgia to Canton, Michigan in 1999. They lived in Plymouth, Northville and finally settled in Livonia, Michigan. Her family says, “she was born to be a wife, mother, grandmother and a pastor’s wife.” Together, Myra and Jeff raised their family of three daughters who married and blessed them with three beautiful grandchildren. Myra had worked in the Banking Industry for 32 years serving in many capacities including that of a Loan Officer. But her most important career in life was being a faithful mother and pastor’s wife ministering in the churches they served as a teacher, counselor, organizer, women’s ministry leader, children’s ministry, community charities and outreach through the church and building relationships. Myra had a calm grace and a quiet confidence. Her family, friends and anyone whose life was touched by her could testify of her grace, dignity and godliness. Myra was steeped in an unending faith in God that brought guidance and direction to her everyday life. She lived her life in God’s Word. She depended on the Lord to work in her life, called upon Him and turned to His Word as she daily praised and thanked Him for the blessings of a wonderful life. Her example as a devout Christian woman, wife, mother, friend, neighbor and ministry leader will be felt for generations to come. She had 58 years on this earth, and this year, Myra will spend her first Mother’s Day in Heaven.

Friends may visit at the Four Winds Church,(Meets at the Marquis Theater) 135 East Main Street, Northville on Monday, April 19, 2021 from 10:00 A.M. until time of service . The Funeral Service in celebration of Myra’s Life will be officiated by Reverend Patrick Fuller beginning at 2:30 P.M. Myra will be laid to rest at Parkview Cemetery in Livonia, Michigan.

For those who cannot attend and wish to view the Funeral Service in a safe environment, the funeral will be live-streamed.


Those who wish to honor the memory of Myra Kay Noble are invited to consider making a memorial contribution to Four Winds Church, c/o 36039 Scone Street, Livonia, Michigan 48154. Contribution envelopes will be available at the visitation and funeral service.
To order memorial trees or send flowers to the family in memory of Myra Kay Noble, please visit our flower store.