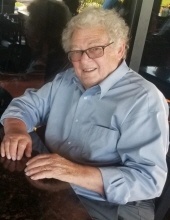 On September 22, Maynard C. Bowers, 90, passed on into the arms of the Lord. He joined his wife, Leenamari, who went to be the Lord on September 7; and his son Maynard (Jake) Bowers, Jr..

Maynard was active as a youth in Battle Creek, MI. From there he joined the United States Air Force during the Korean war, which allowed for his schooling. He pushed forward to earn a Ph.D. while working summers with the National Park Service. During the last couple years of his dementia, his most favorite thing to talk about was of Glacier National Park where he guided many people through the majesty of mountains.

He began and ended his professional career at Northern Michigan University. While there, Maynard traveled and spoke at a number of conventions with Sigma Xi. His botanical specialty was bryophytes. The family always chuckled at the amount of moss and other biological things for teaching that were always to be found in the freezer.

After retirement, Maynard became involved with Rotary International in Marquette. He held leadership positions and travelled meeting new friends in the promotion of Rotary's international good will. His retirement years were spent laughing with friends, enjoying God's creation, and watching sunsets at the Petticoat Lake cottage.

Maynard and Leenamari developed life-long friends in the Marquette area through the university, church involvement, and Rotary International. In the final few years, Maynard and Leenamari lived near their children in SE Michigan. Here they joined a new church, met new friends and continued to spread that same charm and love they were known for.

They each brought laughter and joy to so many! These friendships now carry on into the lives of their children. What a legacy of love they leave!

"I have finished my full course with all my might and I've kept my heart full of faith." 2 Timothy 4:6-7.

And now the baton of that race continues on for those of us still here.

If you would like to honor Maynard's memory financially, please consider a donation to Samaritan's Purse Veteran's program: https://www.samaritanspurse.org/memorial-page/maynard-and-leenamari-bowers-canton-mi/

There will be a Memorial service to honor and remember Maynard and Leenamari on Saturday, Oct 9th at 1pm Friendship Church Canton. 1240 Beck Rd, Canton, MI 48187
To order memorial trees or send flowers to the family in memory of Maynard Bowers, please visit our flower store.