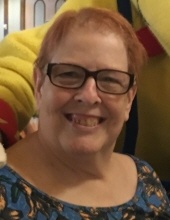 Mary Theresa Larkin, 69, returned to God’s embrace on November 25, 2018 after a valiant battle with pancreatic cancer. Her devotion to her Catholic faith and many family and friends, were a support to her during her illness.

Mary was born in Detroit, MI on September 7, 1949. She grew up in Livonia and attended Our Lady of Providence School in Northville. In 1987 she moved to Edgewater/New Smyrna Beach, FL were she was involved with Sacred Heart Catholic Church and loved attending Detroit Tiger spring training games. She was cherished in her Florida community, and especially loved spending time at Flagler Beach and socializing with her close friends at the nail salon and the Beacon Restaurant. In 2006 she returned to Michigan where she was very proud to live independently in her own apartment with support from her loving friends Carol Stewart and Anne Zarem.

A Detroit Tiger fan through and through, Mary collected memorabilia and even had a chance to meet her favorite Detroit Tigers this summer, James McCann and Mikie Mahtook. She was on several Special Olympics teams throughout her life including bowling, basketball, and track and field. In her younger years, she won a gold medal in the Special Olympics Track and Field State Games. Mary loved to sing old songs and was always up for a good time with her friends and family.

A Memorial Gathering will be Friday, November 30, from 2-8pm at the Schrader-Howell Funeral Home, 280 S. Main St., Plymouth 48170. There will also be a Rosary Service beginning at 7pm. Her Funeral Mass will be Saturday, December 1, at 11:30am at Our Lady of Good Counsel Catholic Church, 47650 N. Territorial Road, Plymouth, 48170. Family and friends may begin visiting the Church at 11:00am. Memorial donations may be made to The Arc of Northwest Wayne County and Angela Hospice.

To order memorial trees or send flowers to the family in memory of Mary Theresa Larkin, please visit our flower store.