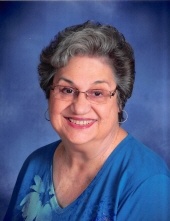 Mary Margaret “Peggy” Haislet of Canton, died August 27, 2019. She was 81 years old. Peggy was born in L’Anse, Michigan to Theodore and Mary (Gamache) Beckman. Peggy is survived by her three loving children Don Haislet, Curt Haislet, and Kathy (Richard) North, and her six cherished grandchildren Raeann, Mackenzie, Hannah, Heather (Phil), Cameron, and Scotty. Peggy was preceded in death by both of her parents and her siblings Theodore, Fedora, and Robert.

When Peggy was young her family moved from the Upper Peninsula to Sandusky, Michigan and then she moved to Livonia, Michigan. After she graduated high school, Peggy went on to work for Ford Motor Company. She was then blessed with three children and stopped working to raise them. Once her children were of age, Peggy spent the next several years as a bus driver for Plymouth/Canton Schools. She was the #1 ranked bus driver in Wayne County and 8th in the state. After that she worked at Draugelis, Ashton, & Scully Law Firm in Plymouth.

Peggy was also an avid bowler in her younger years; and in later years became a golf enthusiast. She loved to spend time with friends playing games like bingo, pinochle, and bunko. Peggy also enjoyed all arts and crafts and was constantly on the hunt for antiques. She enjoyed listening to all kinds of music, and in her later years became quite fond of country music. Peggy was a long-time member at St. Thomas a’ Becket Catholic Church in Canton.

Visitation will be Friday, August 30, from 2 - 7pm with a short Rosary and prayer service at 7:00pm, located at the Schrader-Howell Funeral Home, 280 S. Main St., Plymouth, 48170. In lieu of flowers, memorial donations may be made to St. Jude’s Children’s Hospital.

To order memorial trees or send flowers to the family in memory of Mary "Peggy" Haislet, please visit our flower store.