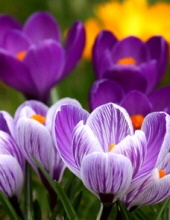 Loving wife, mother, grandmother, sister, daughter, Mary Lou was born and raised in Grand Rapids, MI.  During her time in middle and high school, she was a drum major in the marching band and very active in the Girl Scouts.  She married Doug Johnson in 1966, after they both graduated from MSU.  She taught at Cooper Elementary for 4 years before leaving the classroom to raise her sons, Tom and Mark.  In addition to taking care of her three boys, she remained active in the Girl Scouts, leading a troop for many years.  In 1985, she went to work for Plymouth-Canton schools, where she worked as a paraprofessional and secretary until she retired in 2001.

In retirement, Doug and Mary Lou enjoyed travelling out west to see their son Tom, down to Florida to spend several spring breaks with Mark and the Hart family, as well as trips on their own to the Smoky Mountains and around Michigan. She was a big fan of TV game shows, classical music, and all manner of puzzles (jigsaw puzzles, crossword puzzles, word games), and more recently, mobile app games on her phone and tablet. She is survived by her sons Tom and Mark, Mark’s wife Trista, and her grandchildren Lucas and Claire.

Mary Lou will be reunited with her loving husband Douglas on Saturday, June 20th. They were deeply loved and respected by all who knew them. They will be greatly missed.

Instead of a formal service at a funeral home, we will be holding an informal visitation at her final resting place. Mom has been cremated and will join dad in their niche. We invite all who wish to pay their respects and say goodbye to stop by Riverside Cemetery in Plymouth, Saturday, June 20 from 1 – 4 pm. Riverside Cemetery is near the intersection of Plymouth Rd and N Haggerty Rd. The entrance is on Plymouth Rd, immediately west of the 35th District Court House. Drive in about 300 yds and look for the MSU flag.
To order memorial trees or send flowers to the family in memory of Mary Lou Johnson, please visit our flower store.