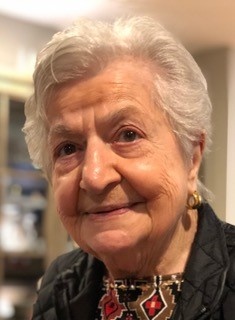 Mary was passionate about her four children, eleven grandchildren, and four great-grandchildren.  She shared her love of music with others by singing with the Armenian Congregational Church choir and was a beloved piano teacher for more than 25 years.

Born to Stephan and Pailoon Jevahirian in 1926, Mary grew up in Highland Park until her marriage to Eddie Derian in 1948. Together they raised four children in Livonia and West Bloomfield. They were married for 64 years before Eddie’s death in 2012. Mary’s legacy includes her children the late Gary, Richard (Jane), Janice (Daniel Toth), and Carl (Mary), eleven grandchildren, John, Katherine (Stefano Pelaggi), and Anna Derian; the late Colin, Alex (Julio Pinto), Meredith, Madison (Shannon), and Garrett Derian-Toth; and Michael, Garrison, the late Christopher, and Cameron Derian as well as four great-grandchildren Emmanuel, Santiago, and Sebastian Pinto and Viviana Pelaggi.

A memorial in Mary’s honor will be held in the fall.

To order memorial trees or send flowers to the family in memory of Mary Derian, please visit our flower store.