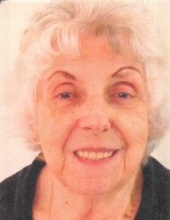 Marilyn Ann Parmenter, wife of John Clifford Parmenter. Born October 31, 1942. Passed away peacefully on December 27, 2021. Marilyn was born and raised in Plymouth, MI. While growing up she was close to her mother, father and two brothers, Dale and Don.

As a young girl, she and John (Parmenter) attended the same school. Little did she know, John enjoyed following Marilyn home from school. By the age of 12, John somehow knew that one day he would marry Marilyn. On May 20, 1966, John and Marilyn were married. They enjoyed 55 married years together. Marilyn especially loved dogs and children. She worked at the church nursery loving on the children. She and John had a dog named “Fefe” that traveled with them oftentimes while John drove truck. “Fefe” was a great companion and watch dog.

Marilyn was an “Avon Lady” for many years. She held parties and won many awards for her sales. Many women enjoyed the parties held by Marilyn throughout the years. She was involved with Tops and served as treasurer. She also was a chair member of Tri-Lakes Board over a period of years.

Marilyn worked at Village Shoe Inn in Farmington for over 30 years as well as Walmart for ten years. Oftentimes, regular customers specifically chose Marilyn’s check-out lane because they enjoyed her welcoming greeting and smile.

Over the past couple of years, Marilyn had more difficulty getting around. Her husband, John took very good care of her always…through sickness and in health.

Marilyn was a wonderful lady and she will be sorely missed.

She is preceded in death by her grandparents, Oscar and Ida, parents, Alfred and Dorothy Houghton, and her brothers, Dale and Don. She is survived by her husband, John Parmenter and two nephews, Jonathan and Jeff Houghton.

Marilyn will be laid to rest on December 30, 2021 at Cadillac Memorial West in Westland, Michigan.

If desired, friends and neighbors may make a memorial contribution and send condolences to John Parmenter in honor of Marilyn at 1785 Shoreline Drive, Hartland, Michigan 48353.
To order memorial trees or send flowers to the family in memory of Marilyn Ann Parmenter, please visit our flower store.