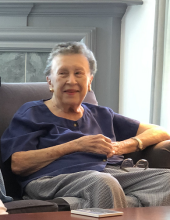 Margaret Keith Rice was born in Clayton, Georgia, on September 28, 1936, to Elswick and Elizabeth Keith. She resided in Eton, Georgia, and multiple military bases during World War II and the Korean War. She moved to Arlington, Virginia, in 1957. She married Robert V. V. Rice, Jr., on January 4, 1959. They moved to Hillsdale, Michigan, in 1970 and lived there for 24 years before retiring to Northern Michigan. Margaret died April 10, 2020 in Canton, Michigan.

Surviving members of her family are her husband, Robert, their daughter, Frances Elizabeth Wagner and son, Robert Rice and their respective spouses, Robert W. Wagner and Rebecca Brown Rice.

Burial will take place at Cross in the Woods Cemetery in Indian River, Michigan. At a later date, the family will have a graveside service.

Memorial Donations may be made in Margaret’s memory to a hospice organization of your choice.
To order memorial trees or send flowers to the family in memory of Margaret Rice, please visit our flower store.