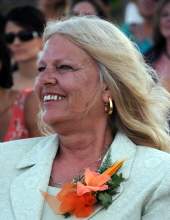 Marcia Ann (Marzonie) Elsner of Plymouth, Michigan passed away on Monday, June 29, 2020 at the age of 72. Marcia was born in Flint, Michigan on June 14, 1948. She graduated from Flint St. Michael’s High School in 1966 and from Central Michigan University in 1970 where she earned a Bachelor of Arts degree in Secondary Education, Social Sciences and Physical Education. She also completed graduate courses at Central Michigan and Eastern Michigan University. Marcia was very athletic and excelled as a Flint Olympian tennis player in the 1962 Can/USA Games.

Marcia married Robert Elsner in Flint, Michigan on August 20, 1971. She was a teacher and coach in Beal City, Michigan. They later moved to Plymouth, Michigan where she taught in the Plymouth-Canton school system. Marcia was active in the Allen School PTO for many years and served as President. She was a member of the American Association of University Women and was active in the Canton High School booster clubs for soccer, basketball, baseball, tennis, volleyball and softball. For many years, she served as Voter Precinct Chairman for Plymouth Township. After her retirement in 2008, Marcia became passionately involved in researching and compiling her family genealogy records and eventually publishing several books that she shared with grateful family members.

Marcia cherished spending time with her family and friends and she will be deeply missed and fondly remembered by all who knew her. She is survived by her loving husband of over 48 years, Robert Elsner of Plymouth, Michigan, son Michael (Bethany) Elsner of West Bloomfield, Michigan, daughter, Elizabeth (Kurosh) Nahavandi of Portage, Michigan, three grandchildren, Aria Nahavandi, Cyrus Nahavandi, and Mabel Elsner, sisters, Delores “Laurie” (Christopher) Culpepper and Mary (Joseph) Stone, sister-in-law, Barbara Mieras, brother-in-law, Gene Elsner and, many nieces, nephews, and cousins. She was preceded in death by her parents, William Joseph Marzonie and Theresa Rose (Jablonski) Marzonie.

We look forward to a future gathering of Marcia’s friends and family to celebrate her life and share memories of the great times we had together. With an abundance of caution and concern for the health and safety of everyone, this event will be held after the threat of the current Covid pandemic has eased.

Memorial contributions may be made in memory of Marcia to the Flint Genealogical Society. www.flintgenealogy.org

A memorial service will be held on Saturday, November 13, 2021 at 2:00 P.M at the Schrader-Howell Funeral Home, 280 South Main Street, Plymouth. The family will receive friends beginning at 1:00 P.M until the time of the service.
To order memorial trees or send flowers to the family in memory of Marcia Ann Elsner, please visit our flower store.