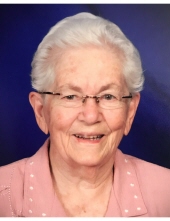 Marcelene Ann Lobb, age 89 of Livonia passed away peacefully on July 26, 2019. On December 30, 1929 in Linden, Michigan, Glenn & Esther Crane welcomed their daughter into the world. Marcelene would call Linden, Michigan her home for the first part of her life and in 1947 she would graduate from Linden High School. Soon after graduating Marcelene went on a double date with a young man named Donald Lobb. Donald graduated three years prior from Linden High School and had just returned home after three years serving his country in the Korean War. Marcelene Crane would marry Donald Lobb on April 14, 1951 and together they were blessed with 68 wonderful years together.

Marcelene became a member of Newburg United Methodist Church over 50 years ago and enjoyed singing in the church choir. Her many interests included knitting, quilting, crafts, camping but most of all spending time with her family was her greatest joy in life.

Visitation will be held on Monday, July 29th from 1:00pm-4:00pm and 6:00pm-9:00pm at the Schrader-Howell Funeral Home 280 South Main St, Plymouth. Funeral service Tuesday, July 30th 11:00am at Newburg United Methodist Church, 36500 Ann Arbor Trail, Livonia. Visitation will begin 10:00am until time of service. Burial will be held on Wednesday, July 31st at Fairview Cemetery in Linden.

To order memorial trees or send flowers to the family in memory of Marcelene Ann Lobb, please visit our flower store.