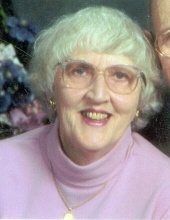 Lila Ruth (Lepperd) Vincent was born in Pittsburgh, Pennsylvania, on June 19, 1930. She died peacefully on July 21, 2021, in Northville, Michigan, due to complications from dementia.

She was the first child born to Robert Earle Lepperd and Mabel Adeline (Ostlund) Lepperd. Her younger brother, John Lepperd, was born in October 1939.

Her father was transferred to Detroit, Michigan in 1932 where she lived the rest of her childhood and youth. She graduated from Cooley High School in Detroit in 1948 and was a member of the Future Nurses’ Club there, having found her calling to be nurse, a lifelong passion for her.

She attended the School of Nursing at the University of Michigan, graduating in 1951 with a 3-year R.N. degree.

She met her husband, Douglas Neil Vincent, in 1950 at a University of Michigan football game. She and Doug were married on March 28, 1953 in Ann Arbor and shortly after settled in Plymouth, Michigan.

Doug grew up in Plymouth and had family there. She quickly became part of Doug’s family and Plymouth became her home. She and Doug raised their family, Steven, David and Linda, there.

She and Doug joined the First Presbyterian Church of Plymouth in 1955, shortly after moving to Plymouth. They raised their family in the church. Both were both actively involved in various church activities.

The majority of her career she worked at Northville State Hospital in Northville, Michigan, initially as a psychiatric nurse and then as the Assistant Director of Nursing. She retired in 1986.

After retirement, she did extensive volunteer work for numerous charitable organizations. She was most proud of her work as nurse supervisor at Karmanos Cancer Center in Plymouth and being a transportation coordinator for FISH (Friends in Service Helping) through the church.

She also traveled extensively with her husband after retirement, both in the US and abroad.

Visitation will be Friday, July 30 from 3:00 pm to 7:00 pm at the Schrader-Howell Funeral Home, Plymouth Michigan.

There will be a memorial service on Saturday, July 31 at 4:00 pm at the Schrader-Howell Funeral Home.

Memorial donations in her memory can be made payable to “University of Michigan” and mailed to:
University of Michigan
Office of University Development
3003 S. State St. Suite 8000
Ann Arbor, MI 48109-1288
Please mention in memo or note "memorial gift for Mrs. Lila Vincent"
To order memorial trees or send flowers to the family in memory of Lila Ruth Vincent, please visit our flower store.