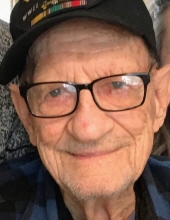 Leonard Roy Schnell, Jr., recently of Northville, formerly of Pinckney and South Lyon, passed away Sunday, September 26, surrounded by family. Leonard was born February 22, 1925, in Ferndale, Michigan, son of Leonard R. Schnell, Sr. and Emma (Ebert) Schnell. The youngest of three, he graduated from Ferndale High School and enlisted into the United States Navy on July 19, 1943. Leonard served as radioman on many landings in the Pacific, earning a star for the Philippian Liberation, the Asiatic Pacific Ribbon, the American Area Ribbon, and the World War II Victory Ribbon.

After the war, Leonard worked many jobs retiring from the Burroughs Corporation in Plymouth. Leonard loved the outdoors, rifle and bow hunting, fishing, playing cards, eating desserts, and drinking root beer. In recent years, his hobbies included Wii bowling, bingo, and any chance to go out to a restaurant. Known as “The Original MacGyver”, Leonard was constantly using everyday materials to invent, improvise and improve. He also enjoyed regaling his family with stories of his many harrowing adventures during the war in the Pacific. Leonard’s favorite place to be was at his property in Lincoln, Michigan, where he forged many trails, made lifelong friendships, and created various projects

Leonard is preceded in death by his wife of fifty-one years, Geraldine (Bennett), his parents, sisters Bernice and Helen, and his grandson, Matthew. Leonard is survived by his children, Susan Almas (Greg), Loren Schnell (Elizabeth), and Marilyn Daubenmeyer (John), seven grandchildren, and five great-grandchildren. Leonard is also survived by many nieces and nephews.

Leonard will be interred at the Great Lakes National Cemetery in Holly, Michigan. No formal services are scheduled at this time. In lieu of flowers, the family requests donations to the Wounded Warrior Project or the American Heart Association.
To order memorial trees or send flowers to the family in memory of Leonard Roy Schnell, Jr., please visit our flower store.