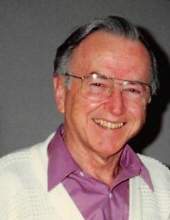 Larry was born on March 9, 1926 in Cleveland, Ohio to his parents, Lawrence G. and Gale (née Curtis) King.

He is the beloved and devoted husband for more than sixty years to the late Joan King; loving father of Michael and his wife, Catherine (née Hale) King and proud grandfather of Sarah (fiancé Justin Proctor) King.

He proudly served in the Navy after attending the United States Naval Academy in Annapolis, Maryland. Following his military service, Larry joined First Federal Bank of Michigan in the Mortgage Service Department as a Data Processor.

Larry was a Barbershop Singer for more than fifty years with the Barbershop Harmony Society - formerly known as S.P.E.B.S.Q.S.A. (Society for the Preservation and Encouragement of Barber Shop Quartet Singing in America, Inc.) The best thing about music is what people do with it. Forming those very tight, four-part harmonies by listening so carefully to the singers around you and creating that very familiar sound of barbershop singing is what makes the music so special to listeners and especially to Larry. He held several positions in the Society at the Chapter and District levels and sang lead for the Motor City Chorus.

In addition to his love and enjoyment of music and singing, he was also a model railroad enthusiast and avid golfer.

Larry is predeceased by his brother, Andrew William Geoffrey King and his sister, Lucile Clarke.

At this time, a private family prayer service will be held. Larry will be laid to rest at Holy Sepulchre Cemetery in Southfield. A Memorial Service for extended family and friends will be scheduled at a later date.
To order memorial trees or send flowers to the family in memory of Larry King, please visit our flower store.