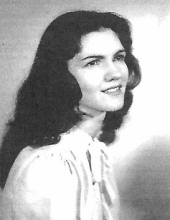 Kitty received her B.S. in Chemistry from the College of St. Francis in Joliet, IL in 1945. Before she married Bud, Kitty was employed as a chemist by the Seagram Company in Relay, Maryland and as a social worker by the Department of Public Assistance in Johnstown, PA. Kitty was a brilliant, wise and creative woman. Whether it was feeding a family of nine on a shoestring, concocting her own cleaning solutions, sewing clothes, upholstering furniture, making jam, pruning trees, caring for sick children and animals, or explaining the War of the Roses, it seemed that there was nothing she didn’t know or couldn’t do. She had a remarkable inner strength and resiliency that bore her through life’s sorrows. She had a deep sense of empathy and always put the needs of others before her own, whether they were those dearest to her or complete strangers. Her greatest joy was her family whom she loved with her whole heart.

Kitty was a devout Catholic, a parishioner for over 60 years at St. Valentine’s Church in Redford, MI. A Memorial Mass will be held at a later date with interment at Holy Sepulchre Cemetery in Southfield.
To order memorial trees or send flowers to the family in memory of Kathryn Quinn, please visit our flower store.