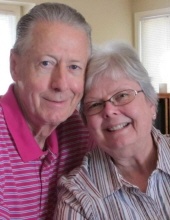 Judith Ann Kral of Plymouth died June 15, 2019. She was 79 years old. Judy was born in Detroit, Michigan on June 23, 1939 to Arthur and Julia (nee Tizides) Dart. Judy was the beloved wife of the late Thomas Kral who died in 2010. Judy is survived by her two loving children, Kevin (Beth) Kral and Karen (Mark Lersch) Kral, her two cherished granddaughters, Rachel and Natalie Kral, and her dear sister, Mary Brown. Judy was preceded in death by both of her parents and two of her siblings, Sherry Jones and Arthur Dart.

Judy graduated from St. Mary’s Academy in Monroe with high honors in 1957. During her time at St. Mary’s, she cultivated lifelong friendships and also met and began dating her future husband, Tom. Although the young couple desired to be married, Tom’s military commitment kept him in Europe for several years – until they were finally able to marry in November of 1960. As a young wife, Judy held various administrative positions until 1965, when she began what she would tell you was her most important job – being a mother. She loved being a mom and was dedicated to her children, pouring herself into taking care of them and her husband. As her children grew, she decided to continue her education, earning a degree in Applied Sciences in 1977. She became a Medical Records Technician and worked at various health facilities for many years. When she retired from working altogether, Judy enjoyed spending relaxing time with Tom, her children, her grandchildren, and her own brother and sisters. Judy and Tom were longtime members of Our Lady of Good Counsel parish, attending since 1976.

Judy was both tender and strong and would not tolerate unkindness toward others. She was a compassionate sister and sister-in-law, a tender aunt, and a trusted cousin. She trusted her children to be independent and make their own mistakes. Judy adored her two granddaughters, never tiring of hearing about everything they did from first steps to career choices. She showered them with unconditional love and, as young children, they were treated to sleepovers, “Adventure Days,” and thoughtful gifts. Judy had a great sense of humor, possessing the ability to laugh at herself and her own mistakes. She was known by her friends to be a loving and kind person who was always eager to wait on guests in her home. Even when she learned that she was sick, Judy maintained her enthusiasm for others, eagerly inviting friends and family to her home to visit with her before she was gone; putting everyone at ease with her warm expression of love for each one, her continued sense of humor about herself and her situation, and her peace about God’s plan for her life and death. Judy was devoted to her faith – a committed Christian who loved the Lord. Her personal relationship with Christ gave her the confidence of knowing that there is no fear in death; instead, she looked forward to “giving Jesus a hug, if permitted.”

Judy will be remembered for how she perceived life and others - through the eyes of love, compassion and understanding.

Visitation will be Wednesday, June 19 from 3-8pm at the Schrader-Howell Funeral Home, 280 S. Main St., Plymouth 48170. Her Mass of the Resurrection will be Thursday, June 20 at 10:30am at Our Lady of Good Counsel Catholic Church, 47650 N. Territorial Rd., Plymouth 48170. Family and friends may begin visiting the Church at 10am. In lieu of flowers, memorial donations may be made to Wee Care (an outreach program of Right to Life – LIFESPAN), 32540 Schoolcraft Rd., Suite 100, Livonia 48150.
To order memorial trees or send flowers to the family in memory of Judy A. Kral, please visit our flower store.