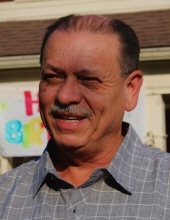 Jose Alberto Soberal was born on June 16, 1960 to his parents Otilio Soberal-Martinez and Elvira Cuevas. A proud native of Southwest Detroit and longtime resident of Canton, Michigan, Jose passed away on May 28, 2021.

Jose grew up as the youngest of eight siblings on 527 West Grand Boulevard in Detroit. He recounted a loving family and many warm memories of his loving father. It was here where his love story with his wife, Ana Fernandez-Soberal, began. Although their families were longtime friends, he did not meet his wife until 1980. They have been together every day since and were married in August of 1985. Together they raised four loving children: Daniel, Nicholas, Marilena and Isabel.

Jose was much more than an employee at the Solanus Casey Center in Detroit, Michigan. His colleagues remember him as a devoted and kind-hearted friend who will be greatly missed. During his time as the Facilities Director, he worked tirelessly to cater to the needs of those he served in the Detroit community, while honoring the legacy of the historic buildings and their namesake, Father Solanus Casey.

Jose had many interests and hobbies, including gardening, reading, cooking, woodworking and spending time with his loving family. He is best known for his home-cooked meals and quick wit. Never without a smile and a fresh cup of coffee, he might be found enjoying the latest John Grisham novel or designing a new project. He was also a lover of salsa and jazz music.

Jose will be greatly missed by those close to him, for he touched many lives. Our memories of him will be forever cherished. He is survived by his wife, Ana Soberal, his children; Daniel, Nicholas (Bailey), Marilena and Isabel, and his siblings; Rene, Miriam, Rosemary, Diana and Carmen.

Friends may pay their respects to Jose and his family on Monday, June 7, 2021 from 2pm to 9pm at Schrader-Howell Funeral Home 280 South Main St. Plymouth, Michigan 48170

Flowers may be sent to Schrader-Howell Funeral Home. In lieu of flowers, for those who would like to make a contribution in Jose's honor, donations may be directed to the Capuchins of Detroit or Forgotten Harvest by following the links below or there will be envelopes available during services.

To order memorial trees or send flowers to the family in memory of Jose Alberto Soberal, please visit our flower store.